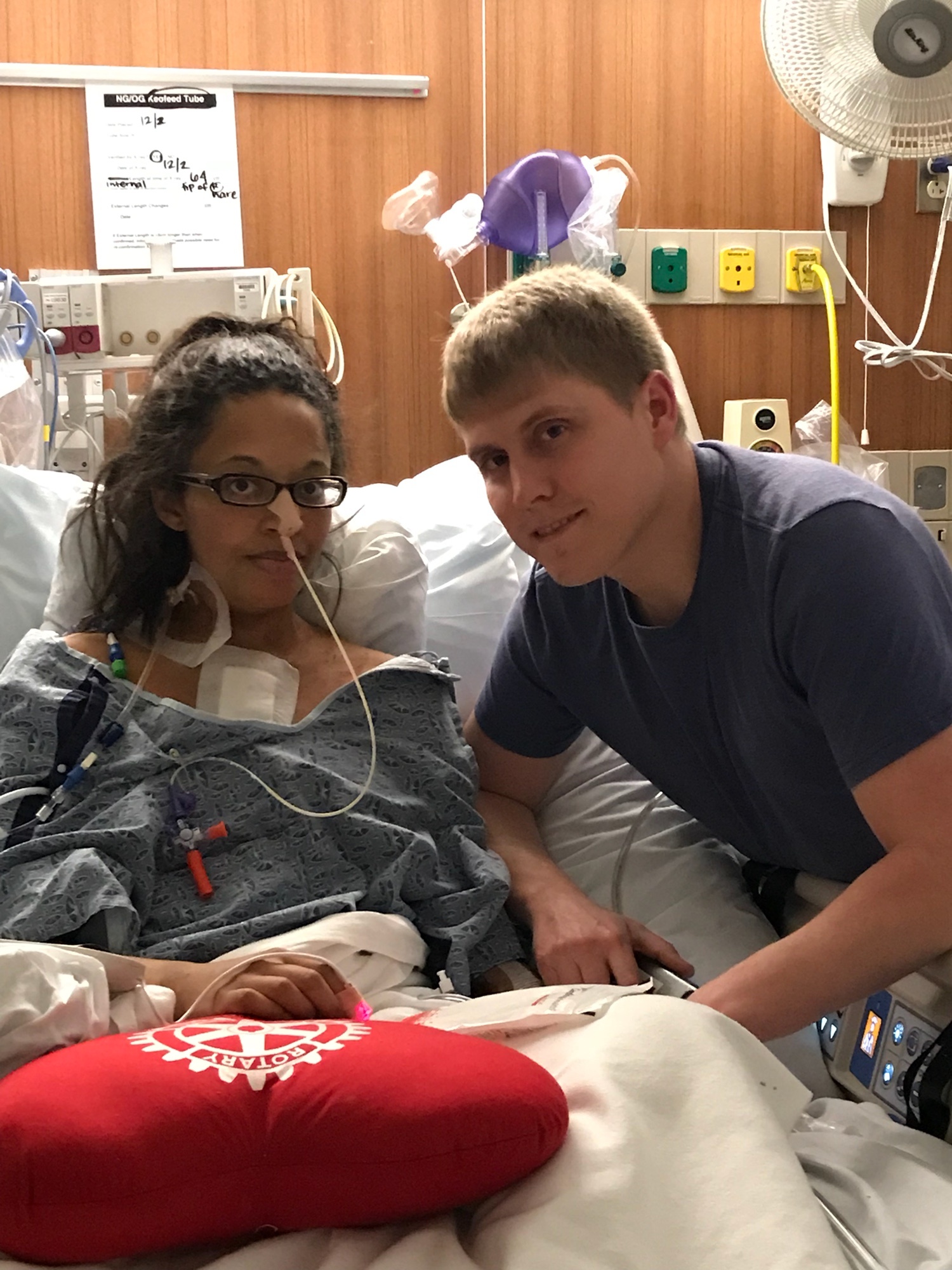 New to This Mommy’s Heart? Check out my story from the beginning here – My PPCM Story

The next few days were pretty uneventful and I seemed to be progressing well. I was out of the bed to the chair multiple times and even got to hold my daughter. My chest tubes, a-line and Foley catheter were all taken out. 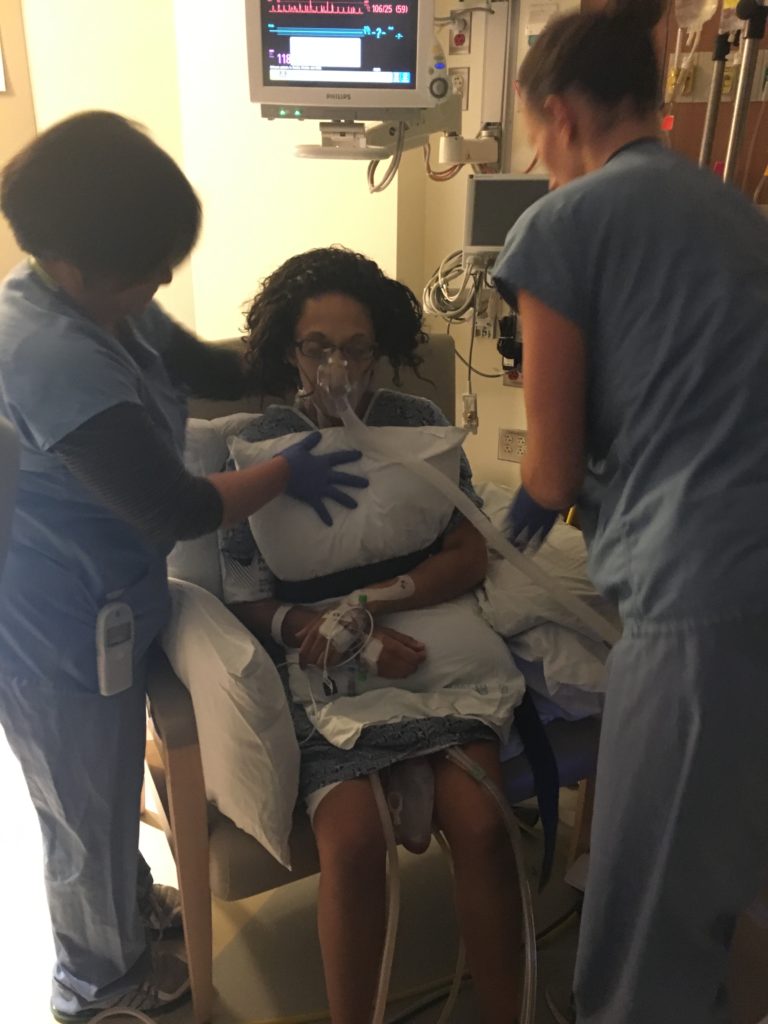 Although I passed my swallow test and was allowed to start eating, the put in a nasogastic intubation (NG tube) to supplement my nutrition. NG tubes are no fun especially when you are trying to eat around them.

Another not so fun thing about being in the hospital? Having other people wipe your butt. I was so sick I never really had embarrassment over it but I still preferred being able to take care of it myself. At this point, I was able to make it to the first step towards toilet independence: the bedside commode. Basically, it is a chair by the bed with a bucket that you go to the bathroom in. Better than the bedpan but doctors and nurses would still randomly walk in on occasion. I’d just give them a wave…

While I had the TAH I dealt with orthostatic hypotension which made it difficult for me to walk very far because I would get very dizzy. The most fun episode of that was when I was using the bedside commode, got up to go back to bed and suddenly I was dizzy, it went black in front of my eyes and my TAH started alarming because my levels had dipped too low. So there I was, pantsless, blacking out and yelling about how I couldn’t see when a bunch of nurses rushed into the room, strung me up on this lift thing and put me back into bed.

Needless to say, I didn’t feel great the rest of that day. Luckily, my kids and a bunch of family came to visit and cheer me up. I was lucky throughout my hospital stay in that I was never left alone. I would imagine it is pretty lonely and scary having to go through this kind of stuff without a support system. My husband was pretty much always there and tried to do what he could to help take care of me. He studied the TAH levels, learned how to plug it in and out and was always asking questions. He always wanted me to be happy and comfortable too so that night we snuggled up in my hospital bed and watched shows from our DVR on my computer until I drifted off to sleep.

The next, according to my husband’s notes, was the “scariest day so far”. This is pretty reasonable considering I was literally minutes from death.

On the morning of December 6th, I woke up with excruciating back pain. My JP drain was very oozy and my hematocrit was so low that I was given 2 units of blood. When the cardiothoracic surgery fellow came to round on me, the fills on my TAH dropped fast and it was determined that I was having tamponade.

The OR and staff were quickly alerted, but getting everything together still took around 30-45 minutes before they got me downstairs. My husband let my parents know what was going on and they rushed to get to the hospital while my father-in-law and my husband’s aunt watched the kids.

My family didn’t know what was going on in the OR but the surgeon was able to explain everything to them after they rolled me back to my room. Apparently, within one minute of them rolling me into the OR, the TAH stopped pumping effectively. I was immediately intubated and my chest was cut open. The pressure was released and my flows went back to normal. They were able to find the leak in the anastomoses between the aorta and TAH which they reinforced. I received multiple blood products during the procedure (this is important to note, I’ll tell you why in a later post).

Since everything happened so fast, however, there was a 10 minutes period where they didn’t have my blood pressure and they were worried about anoxic brain injury. They said my chances were 50/50 I would be responsive when they weaned my sedation. When my family was told this information, my dad went to the end of my bed and just cried. The hits just seemed to keep coming.

So I guess I don’t always get the wrong end of the stick because, as I’m assuming you guessed, I woke up and had a normal neurological status. I was extubated that same day and spent the night resting and talking with my family.

So, what do you do when you almost die? Just keep swimming…

1 thought on “The Scariest Day – So Far”

This site uses Akismet to reduce spam. Learn how your comment data is processed. 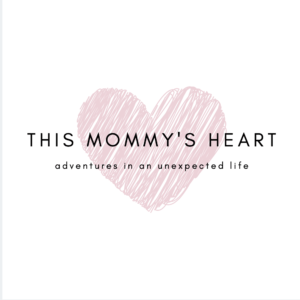 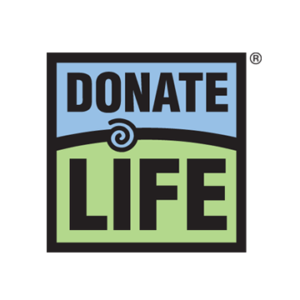 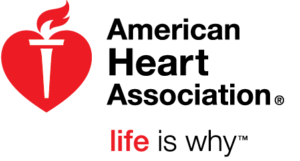 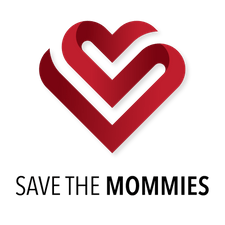